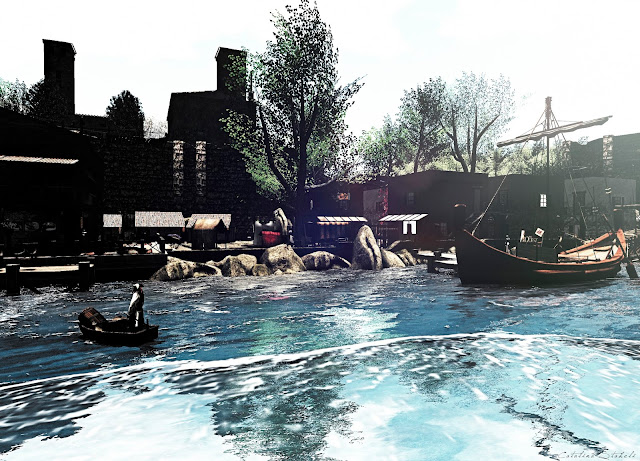 The sim is heavily roleplay oriented with an emphasis on turn-based roleplay and semi to full paragraph emotes, which stays true to the place description. With OOC research, we discovered the owner of the sim to be a free woman whose IC Companion is the Administrator of the Home Stone. This is an interesting mix as it could either work very well or turn quite....intriguing should a personal fight turn into a separation between parties. Time will tell how things go as far as the owners running the sim.

We decided to give Svago a solid 10 out of 10 for appropriateness of roles in the sim. Everyone we interacted with from warriors to physicians to magistrates to bakers to slaves played their roles exceptionally well, in comparison to other places we have roamed to.

As for the Gorean environment, we give Svago a 9 out of 10. The sim stays true to its description, providing us with an authentic Gorean southern environment experience. There is a clear sense of lower city and upper city, as well as notable differences in luxury between both parts of the sim. The build is well organized and it is up to date by modern SL standards. We took out a point because from our time there, the only way to reach the upper city was by a lift that contained boxes. We feel there should be a more defined method of reaching the upper city.

We give Svago a 8 out of 10 for appropriateness of dress and attire. The men and women dressed Gorean, as well as the camisk and silk-adorning slaves. We took two points off because we saw one or two of the Free Women wearing sheer veils, which is a no-no. Gorean males find a woman's lips to be sensual and the sheer veils accentuate those lips, rather than hide them. The sheer veil is used on slaves for that purpose while opaque veils are what Free Women should be using.

We give Svago 9 out of 10 for an overall sense of storyline. During most of our time there, we encountered active roleplay happening and some stories taking place. On our last visit, we had a blast with in-character drama. There was a serious conflict between a warrior and a physician and that drama brought about many different people from several roles and everyone was roleplaying their hearts out. We took a point away because we felt like some bad feelings were carried outside the roleplay and there was a bit of out-of-character anger.

On the subject of lack of thought-emoting, Svago also gets an 8 out of 10. Overall, the roleplayers on sim are very good and they have a firm grasp of Gorean roleplay etiquette, but we did deduct two points for different instances where people would interject their thoughts without appropriate physical actions to help define those viewpoints. A hypothetical instance might be "The baker's daughter stared at the slave girl, wishing she could reach out and smear the girl's face in the mud". As there is no physical action, such as bodily movement (hands twitching, reaching forward, etc), or facial expressions described (frown, glare, etc) to help, this would be purely 'thought' at the audience. We didn't see a large amount of this, but enough to make mention of it.

We give Svago 9 out of 10 for Gorean laws and customs. We were met with no “Heilsas”, the women wore veils, and Gorean law is practiced as seen by the magistrate making a no discussion rule in public about the warrior-physician conflict. However, we did watch a Free tell a slave to go and conduct business with the slave's owner for the Free, in terms of the slave's ownership. This would not have been done in Gor, where the Free would have interacted with each other rather than through a slave as a middle participant, which lost a point.

Taking all of this into consideration, we give Svago an overall score of 8.8 out of 10. It is definitely the best sim we have visited since we started this little journey of ours. Not only that, but considering the quality of the sim and those who roleplay in it, it could very well compete for the title of the best sim in Gor today, but that remains to be seen as our travels continue. And we want to thank Svago for allowing us to visit and hope to see the sim prosper and remain a wonderful place to visit.
Posted by Unknown at 9:20 PM 2 comments: